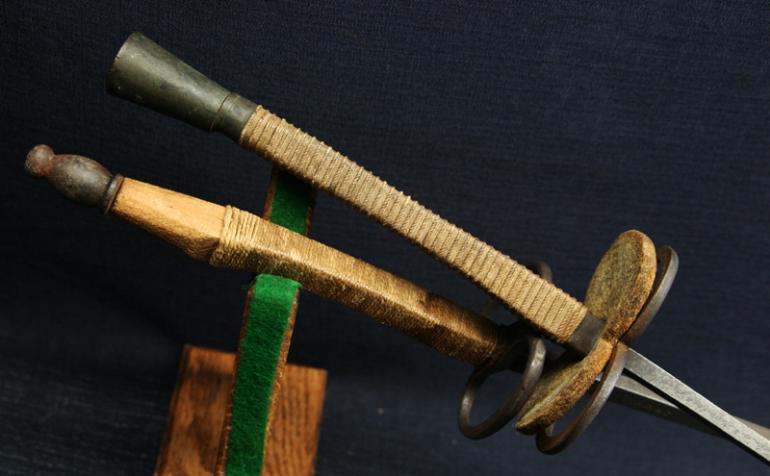 Welcome to The Historical Fencer!

I remember one night when I was 18 and I went to a party at a girl’s house, it might have been on New Year’s Eve, I’m not sure. We were a group of kids who used to hang out and I had a thing for her and was sort of hoping that she felt the same way. It was the first time I visited her house and it turned out her dad collected antique weapons and they were hanging all over the walls. Pistols, rifles, swords, daggers. The parents had left us the house with strict instructions not to touch the weapons. We mostly obeyed.

This girl also had a younger brother, and he was there too. Maybe his dad’s passion had rubbed off on him, because he had two antique fencing foils. Talking about fencing we decided to try them out. It was incredibly cold outside, and since I was a weird kid I had a flouncy white shirt. As we started fencing, snow began to fall, and we went back and forth in the darkness outside the house, slipping, parrying, lunging… From the house we could hear chatter and music and there was light and warmth in the windows, but we were all about the swords. We had a few close calls, nearly missing an eye and a slash across the cheek left a red mark. But we could not stop, it was too much fun.

Late at night, we stumbled back inside. Sweaty and exhausted and happy. To me, even then, it was magical, and the memory still holds that magic. That night carried so much of my love for the sword. Beyond techniques, beyond regards for safety—just the passion and audacity of it.

No surprise, I didn’t get the girl. But I did get a lifelong love of fencing.

I hope you will read this site and see that same passion rubbing off on our articles, and that you will relive your own moments of pure fencing exhilaration.

Fence well and carry yourself with pride,

Subscribe and get the latest updates in your inbox

The Cardinal Virtues as part of fencing culture

Listen to the latest podcast episodes

Listen to the old masters speak

Lessons of the Sword: Great men are here to test you

Lessons of the Sword: Toughen your body to embolden your spirit

Lessons of the sword: Celebrate the sacrifices that lead to victory

Fencing makes one who can do it well into a formidable man.

Listen to the old masters speak – Lessons of the sword